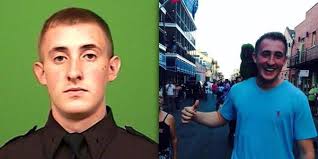 25 years old. A young age for anyone to die. To die at age 25 because you were doing a job you loved to do and were sort of destined to do in following a family line of policing, protecting scores of people you don’t know in a neighborhood not your own makes it even more tragic. This story is a classic example of a young, active police officer doing what he was trained and expected to do and his life being cut short by a career criminal mutant who should have been under lock and key. During an exceptionally well attended funeral on Friday May 8, 2015, he was laid to rest in his hometown in Long Island.

Recently there have been some stories I have seen and discussions I have heard about how policing is not the top most dangerous job. Loggers, truck drivers, construction workers all lead the pack when it comes to the most dangerous jobs according to the Bureau of Labor Statistics . I’m sure no one would argue that it is probably an awful death to be struck by a falling tree or having your 18 wheeler go off a cliff driving on a mountainside on some black ice. Since this seems to happen with a greater frequency than a police officer being killed in the line of duty helps to officially makes those jobs more dangerous than policing aside from the intricacies of the job itself. As a matter of fact many police trainers will describe to their recruit officers or others is that policing is hours of boredom sprinkled with minutes of terror. I can attest to this in that many days on patrol officers are responding to somewhat “routine” calls for service. While we are careful to remind them that no job should be considered “routine” to not let their guard down, the reality is that it does feel that way after a while. Just when you start to feel a sense of repetition or routine, then suddenly all hell breaks loose and suddenly you are in a vehicle pursuit, a foot chase up a few flights of stairs, or trying to hold someones head together that was just shot by some random gang shooting. In some cases you actually have to fully engage in a very angry confrontation with an emotionally disturbed person, a charging maniac with a knife or the three time loser with a loaded gun taking pot shots at you. Some of this may have started by conducting a “routine” car stop for someone who ran one or two red lights and now suddenly is turning into an officer having to fight for his or her life.

While the unpredictability of the dangers of each of the most dangerous jobs (including the not so dangerous policing) is unique and different than most other professions what puts the killing of officers in a special category is just that, they were killed, by someone, because of who they are. I have yet to hear of a rouge oak tree go on trial for slamming one of its limbs down onto a logger on purpose, or a combine throwing a farmer into its mouth to chew them up because it was a long day on the farm. The fact that there are “humans” in our society that have little to no regard for life and have paved their criminal paths to the point where they feel the need to kill a police officer should make other humans with a soul very concerned. That means that if those mutants will be more than happy to kill a police officer attempting to arrest them and put them back in jail where they belong, they will certainly not hesitate to cause more murder and mayhem in our communities if they were to get away from being apprehended. Police officers spend 20, 25, 30 years or more actually doing great things and acting in the way we expect of our police. They intervene in domestic violence situations, hopefully getting an abuser away from a victim and getting the victim needed services. They lock up child molesters, bank robbers, drug dealers, gang members, drunk drivers, and all of those dregs of society who wish to do us harm. They put their personal safety in jeopardy for strangers who many times may not even thank the officer for “saving the day” . On top of that, the working conditions are not glamorous, the internal micromanagement stress sometimes exceeds the street stress and the pay certainly does not even begin to cover what the daily risk to safety and life are to most officers, never mind the microscope and Monday morning quarterbacking that is done these days immediately following a police-related incident. Knee jerk politicians will quickly call for the outfitting of officers with body cams but yet not one would dare wear one while they “work” in a profession where little gets done while our tax dollars pay their salaries as well. But I digress.

In the last year or so there have been a series of very negative stories revolving around police and in some cases there are issues that need to be addressed in policing to improve in the way police deliver their services to the public. There is always room for improvement when it comes to training and I have said as much in prior blog posts. The assassination of Police Officer Moore was not the result of any of the issues recently raised in other police involved shootings, but is the result of something people sometimes tend to forget – that police have a dangerous job and that in the attempt to keep us safe they sometimes give their life for us. When the shit hits the fan you are not calling a crackhead, you are calling the police. They are answering the call, regardless of the current negative climate or risk to their safety and they will come and help. In the event that they are killed it would be greatly appreciated if those efforts are noticed and acknowledged by the general public.