“You know Baltimore is sometimes called B-more right?” I was asked by someone who was questioning me why I would even think of going there in the first place. “B-more?” I asked with my question to a question. “Yes – B-more as in be – more – careful, while you are in Baltimore because it is a dangerous city to be in !”  This was in the spring of 1992 as Camden Yards was opening for its inaugural season for the Baltimore Orioles and my friends and I were planning to go down to see the Yankees play them a couple of months later. A few years later in 1997, when I started dating someone whose family lives in the suburbs of Baltimore County I was reminded of the “B-more” moniker. Off topic, there is a great restaurant on Charles Street called Mount Vernon Stables in which I have still yet to find another place that makes a better crab dip or baby back ribs with sauce probably made from crack. It was that good – at least a few years back it was. Over 20 years have passed since then and with the revitalization of the downtown and inner harbor areas I was just starting to think that maybe Baltimore had finally turned a corner. Perhaps I was a little hasty in my optimistic judgement after the events in April of 2015.

On April 12th, a 25 year old man by the name of Freddie Gray ran from the police in a high crime area, was pursued and arrested by Baltimore Police. During his brief custody while being transported in a police van he sustained an injury to his spinal cord which resulted in his death. Shortly after the incident my phone rang to appear on CNN to discuss the incident with a number of esteemed colleagues and commentators.  According to reports he was not buckled into the van although he was shackled by his hands and feet. According to the autopsy report, it states Freddie Gray suffered a “high energy” impact injury to his neck and spine “most likely due to a sudden deceleration of the van he was riding in”. His death was ruled a homicide firstly because it was not a natural occurring death and also due to “acts of omissions” during the investigation into the death itself. Six officers who were involved with the arrest, transport and supervision regarding Freddie Gray were all arrested and indicted on multiple charges in which a trial has been set for October. All six officers have pleaded not guilty. My prediction is that all six will not be convicted, certainly not of the top charges and I believe some may not see any charges stick at all aside from some internal departmental charges. I could be wrong so lets see how things unfold and if they get a fair trial.

That brings me to my next point. Will they get a fair trial? There have been a number of people (including myself) calling for the State prosecuting attorney Maryiln Mosby to remove herself from prosecuting this case. Even though she has family members in law enforcement Miss Mosby, who has ties to the family attorney for Freddie Gray (who gave $5,000 to her campaign) stated to him that she “doesn’t trust the police herself”. That coupled with the fact that her husband is the council person in the area of this occurrence just muddies the waters even more of multiple conflicts of interests for her to prosecute this without multiple levels of personal bias. Adding to that she came out within a very short period of time and leveled all kinds of charges against the six officers before any of the investigations were completely concluded with an impassioned speech very dramatically speaking to young people; “To the youth of this city: I will seek justice on your behalf, This is a moment. This is your moment. Let’s ensure that we have peaceful and productive rallies that will develop structural and systemic changes for generations to come. You’re at the forefront of this cause. And as young people, our time is now.” With all due respect – what the hell is that all about ? If you are bringing charges then come out and explain your charges. No one needs a big dramatic, cinematic moment on the steps as if you are launching your next political conquest which clearly seems to be the personal motivation here on Miss Mosby’s part. Make no mistake, this is her “moment” to use this case as a launching pad to further her own future political aspirations. Oh, by the way one of the main charges that she brought forth of the officers not having probable cause to arrest Freddie Gray in the first place fell apart after it was discovered (in the ongoing investigation) that they DID have probable cause to arrest him. Oops. In the possession of the knife Freddie Gray had, (a spring-loaded switchblade) is illegal under the law of Baltimore City, even if it is not proscribed by state law. I have said it before and I will say it again. I am very much against police brutality and illegalities. If an officer has done something off base and you have him/her then go for it. Policing has no room or tolerance for those who would tarnish the great work done by everyone else on a daily basis. What I also can’t stomach are those individuals who would walk on the backs of cops to further their own political or personal agendas, some by doing so risk an even greater problem in the same communities in which this occurred.

If it wasn’t bad enough that the prosecuting attorney’s case is falling apart at the seams, there is the little occurrence which happened after this story blew up which was the blowing up of Baltimore by riots. I am all for people protesting or demonstrating. That is one of our fundamental rights as Americans to do so. PEACEFULLY and orderly. What took place in Baltimore in which allegedly the Baltimore Mayor Stephanie Rawlings-Blake stated; “I’ve made it very clear that I work with the police and instructed them to do everything they could to make sure that the protesters were able to exercise their right to free speech, It’s a very delicate balancing act because while we try to make sure that they were protected from the cars and the other things that were going on, we also gave those who wished to destroy space to do that as well, and we work very hard to keep that balance and to put ourselves in the best position to de-escalate.” was incompetent at best, reckless endangerment at worst.

If people wish to organize a peaceful demonstration or protest that’s great. Police departments, particularly larger ones like Baltimore police events like that all the time. With planning and cooperation these events take place and generally go off without a hitch. When there are random groups of people (usually younger people) you are all amped up with emotion, operating with very little facts and no leadership, and some who are “opportunists” it is a perfect recipe for a situation to spiral out of control into a riot. A riot is a very dangerous place to be in the middle of because things go south very quickly, the police are usually outnumbered until back up arrives, sometimes by the way of the national guard and it is a very unpredictable situation in which people can easily get hurt or killed. What was inspiring to see was after the first couple of nights of rioting was older members of the community coming together to organize, work with the police and to help quell the instigators from continuing to burn their own city down. One in particular was a woman, Toya Graham who quickly was being voted “mom of the year” by jumping in when she saw her 16 year old son, in a mask, getting involved in the rioting. She pulled him away from the crowd and proceeded to shout at him and pull his mask off. God bless that woman. If I was acting that way my parents would have done the same thing or worse. In media interviews afterwards her son recognized why she did what she did and acknowledged what he was doing was wrong. Good for him as it takes alot of guts to admit on national television that you made a poor choice and have learned from it. 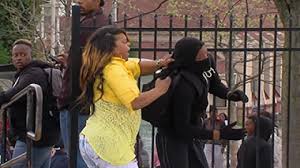 Setting the trial date in October I am sure was a tactical move (aside from a busy docket calendar). The hope is that by October, the summer is over, kids are back in school, the weather is getting cooler and by the time the trial is over it will likely be around the holidays depending on the length of the trial. Based on what we know at this juncture it looks as if the prosecutor will not convict all six officers and depending on how many are convicted and on what charges that may or may not sit well who believe that justice is not being served. What I would advocate is that people educate themselves a little on the law and how trials are run. Police officers, while held to a higher standard than the average American, are innocent until proven guilty just like any other American. When making a judgement call on this or any other police involved case regardless of how much if any video is involved, ask yourself what do you really know about the facts and evidence in this incident. When you surround yourself with facts and evidence and the law then we are all in a better position to play Monday morning quarterback and make judgement calls. Until that happens I would urge restraint, patience and caution. I happen to like Baltimore as a city and for as much as I don’t want any police officers being injured or killed I don’t want anyone else being killed by antagonists starting trouble and running away with their looted slurpee and potato chips over nonsense.

Let’s also pray that the summer does not become a bloodbath and people will help the police get a handle on the violence that takes place in Baltimore which has recently spiked. The police having been raked over the coals for the last couple of months or so will be apprehensive to take action for fear of being locked up by an overly aggressive anti-police prosecutor, but they still need to do their basic job so it will be a delicate balancing act for some time to come.

*Update: An interview with Megyn Kelly on the Kelly File on Fox News in regards to this happened on 7-1-15: