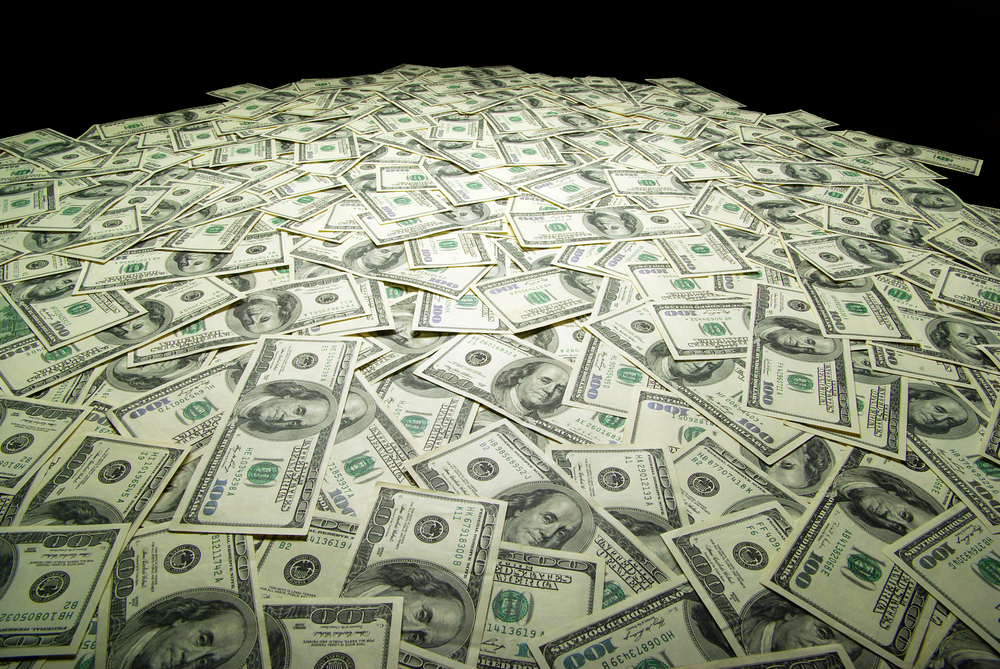 What’s the old saying? You can’t fight City Hall! Well apparently you can. And win. Big.

It has become almost a part time job for some people to sue New York City, particularly lawsuits against the NYPD are almost the automatic go to when looking to make some easy money. Sure you can sue for a trip and fall on one of the many faulty sidewalks of the city. You could make a claim that firefighters stole something from your apartment after soaking it down during a fire in your building. Huge crater of a pot hole swallowed up half your car and sent you through the windshield? Entirely possible in the moon like facade of New York City’s “streets” with its crumbling infrastructure like the rest of America. But if you want the big bucks…I mean the really big bucks, it’s the police department you sue because you are nearly guaranteed a pay out by the city on their behalf, and sometimes all you need to do to accomplish that is to start by committing a crime.

In October of 2014 New York Magazine reported that since 2009 New York City had paid out nearly 428 MILLION dollars on behalf of lawsuits involving the NYPD. Wow. That is a heavy chunk of coin. What the hell was I thinking? Getting up every day, working all kinds of crazy hours, risking my life when I could have just when to my local law firm of Doowee Cheatem & How and filed an abuse claim and made off with a cool basket of cash! Now before some of you turn all kinds of purple and start screaming about the big bad abusive racist storm troopers the NYPD is filled with I will admit that there are certainly times when SOME of NY’s Finest do not live up to the fine reputation and gold standard of policing the NYPD has set.

You may remember back in 1997 there was the infamous Abner Louima case in which a 31 year old Haitian immigrant was brutally sodomized with a stick from a mop by a mutant in a police uniform by the name of Justin Volpe. The attack left Louima, in critical condition with a punctured bladder, tears to his lower intestine and smashed teeth.To add insult to injury of this heinous and unimaginable attack his co-worker Chuck Schwartz perjured himself about the attack and he and Volpe were convicted of their roles and both went to jail. Louima sued and won an 8 million dollar settlement. In that instance I would have given him 10x that amount because what took place in that incident was so far off the rails, there is no way you could justify not giving him a boat load of money for such a grizzly act. 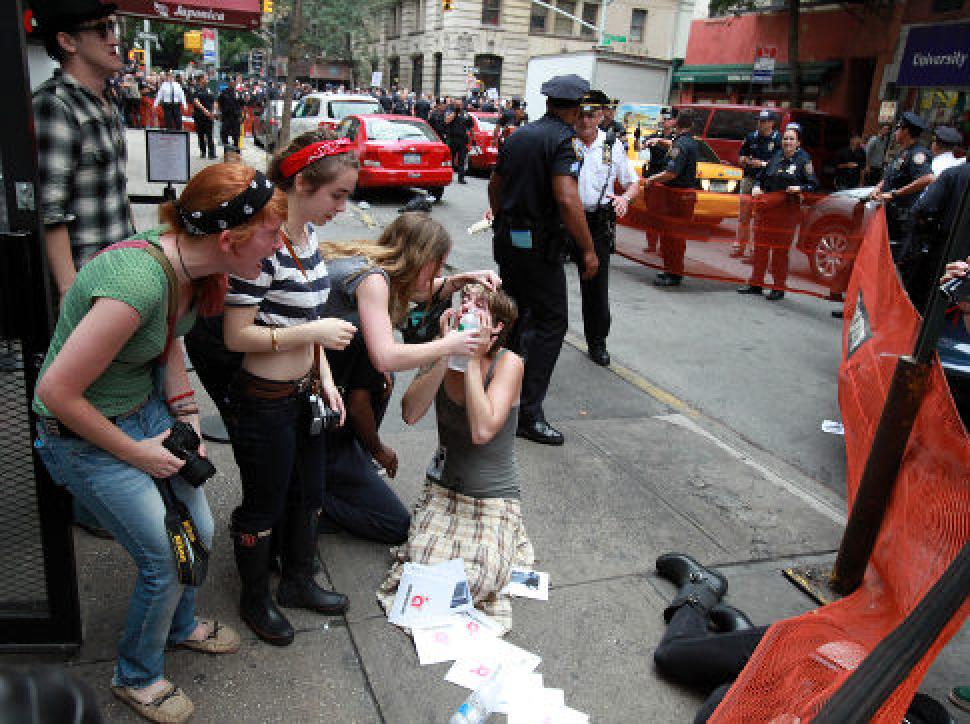 Now enter the ridiculousness. In Early July 2015, NYC paid out over $330,000 to a half dozen protesters from the Occupy Wall Street “movement” which is on top of another million or so they have paid out since 2011 when Occupy Wall Street first popped up and started causing chaos in New York City, mostly in Manhattan. A number of protesters were relatively peaceful and enjoyed roaming with the masses aimlessly through the streets of Manhattan during the day and for a short while camping out in Zuccoti park downtown at night in a mini Woodstockesque types of sleepovers. However there were a number of anarchists and opportunists that in their lust for anti-establishments did everything to incite clashes with police aside as well as annoying the crap out of the average NY’er trying to get around town. Having been in the middle of these massive demonstrations where 2 or 3 dozen world problems would be screamed about (with somehow the police as the root of all evil), with little to no leadership, and a visceral response to any dialogue with the police to try to have an hint of responsible planning was nearly always met with an elitist middle fingering to the face of the police. The ensuing disrespect would invite a constant pissing contest of those who felt they could just molest Manhattan any way they felt while having no regard for the general safety of the public around them, including police officers who ironically are there to help protesters exercise their right to assembly and free speech, in a safe and orderly manner. When scenes would get out of control as they many times did, the police would have to ramp up the numbers of officers and the use of force when it was trying to stop the situation from spiraling out of control and / or making arrests. In the case of Inspector Bologna ( now retired ) he felt it was necessary to use a higher level of force by spraying pepper spray onto non compliant protesters to comply with the lawful orders of the officers present that were not being followed. They resisted. He sprayed. They got paid. 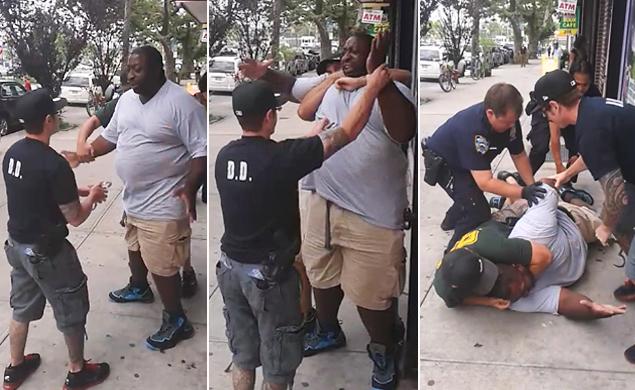 The Eric Garner settlement announced July 13, 2015 is simple as it is difficult. His family was awarded $5.9 MILLION dollars in a wrongful death lawsuit against the NYPD when he died after being taken into custody in July 2014 in Staten Island. At the behest of Mayor DeBlasio, the NYPD was enforcing “quality of life” crimes such as the selling of loose cigarettes. The mayor while playing to public sympathy during the non indictment of the officer involved in the death of Mr. Garner calling him a “good man”, was also secretly having his law department draft a federal lawsuit against tobacco suppliers to further crack down on the sale of loosies. Hypocrisy much? According to the story broke by the NY Post; One city official said, “City Hall knew they had screwed up, so they squashed the press release. “You can’t have the mayor blabbing away that selling loosies is a ‘minor offense,’ but then have the Law Department, which represents and protects the city and the mayor’s interests, file this suit,” the official said. “It reeks of duplicity.”

Garner had been arrested 30 something times and was on the (criminal) books since 1980. For some reason, on that day, he chose to once again commit a crime (albeit a low level crime), and then to make things worse for himself chose to resist arrest. By him choosing to do that it forced the arresting officers to use physical force against him to take him down and get him into custody with handcuffs. The fact that he had a number of serious health issues such as asthma and a bad heart greatly contributed to his death which is why the officer who used a tactical maneuver taught in the academy was not indicted. For the record: HE DID NOT DESERVE TO DIE BECAUSE HE WAS SELLING LOOSIES. However, two wrongs do not make it right.

The taxpayers having to foot a nearly 6 million dollar bill due to all of this ( that’s right folks – YOU, the NYC taxpayer are flipping the bill for this ) is a bit excessive in my opinion because while there was a death in connection of an interaction with police, this was not a case of a blatant crime against an individual, but an individual who decided to not do himself any favors by committing crime and then not wanting to own up to it ( for the 31st time ). We have to start deciding when is it that personal responsibility comes into play when dealing with the police? Especially when they are doing the job they were directed to do ( from the top down ), and you as the offender get caught and then refuse to comply with the arrest.