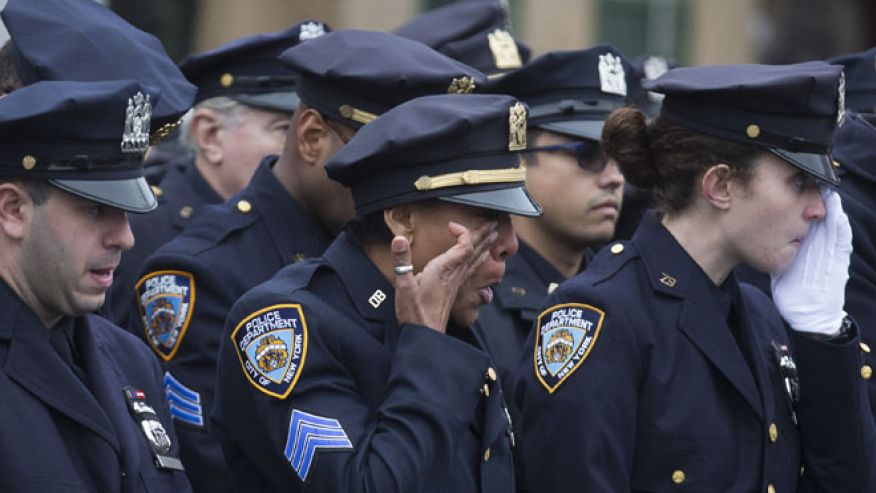 Well it’s a new year and unfortunately on the heels of TWO NYPD officers,( Detective Rafael Ramos and Detective Wenjin Liu) being assassinated just a few days before Christmas, we no sooner lay Detective Liu to rest and we have two more NYPD officers who were shot Monday night in the Bronx during a botched robbery by a couple of thugs. The day after the assassination of the two officers in Brooklyn there was a Tarpon Springs Police Officer, Charles Kondek, who was also shot AND run over by a 23 year old maggot who had just been released from prison in March of 2014 and was wanted on a parole violation. About a week after that just before the end of 2014 a Flagstaff Arizona Police Officer Tyler Jacob Stewart, just 24 years old was shot by a mutant as the officer intervened in a domestic violence incident. Policing is a dangerous profession and all who take on that awesome responsibility know this when raising their hands to pledge their allegiance to serving and protecting the public. In the case of the Florida and Arizona officers, as well as the two recently NYPD officers shot in the botched robbery it seems that there is no connection at this time to the two murdered officers in Brooklyn on December 20th, 2014. Not that one shooting injury or death is better than another of course but in the recent three shootings they were in the course of some sort of enforcement or police action, which is how most cops figure they would potentially face injury or death.

What made the death of the two officers in Brooklyn particularly disturbing ( to anyone with a soul ), was that they were killed simply for wearing a uniform and sitting in a marked NYPD patrol car ( having lunch ). Any citizen should be very concerned about police officers being killed period. If someone has it within them to kill a police officer then there isn’t really much holding them back from wanting to kill you. That is a special kind of crazy. It seems that a lot of people were disturbed by the double killing in Brooklyn. It seemed to come at a point where a certain segment of people, upset over a series of police interactions (that ended with the death of the person they were attempting to arrest), came to a boiling point through a series of “peaceful” protests. These “peaceful” protests which included the taking over of various streets, roadways, and bridges and the assaulting of 2 officers on the Brooklyn Bridge as well. The cherry on top was of course various blasts of vitriol towards police including some terroristic types of chants such as “What do we want? Dead Cops! When do we want it? Now !”

This where we come to the current unrest in New York City between the NYPD and the Mayor ( DeBlasio ). This mayor is someone who (as candidate DeBlasio) ran a campaign heavily slanted against the NYPD’s policy of “stop and frisk” but was paraphrasing the NYPD as this out of control gang of thugs and racists. Then he won and realized – “Oh crap, I now have to work with these guys”. Let’s not forget the makeup of the NYPD is now largely of “minorities” who are now the majority of officers.

I will be the first to say that stop and frisk had gotten out of control under the Bloomberg / Quinn / Kelly regime. They decided to make stop and frisk part of the monthly quota system which was a mistake. You can certainly find 25 parking summonses in a month but you may or may not find “X” amount of people to stop and frisk legally, so thats why the numbers of stop and frisk were way out of line. There will always be more people who get stopped and frisked but not arrested simply because they are not wanted in connection with that stop and frisk. So reforming stop and frisk and how its done was actually a welcomed reform by the cops who were being ordered to do them in bulk from the top down which included a black Chief of Department (and Kelly prodigy). Now they can be done in a more reasonable way and not to fill a quota. That is probably where the like ( not love ) affair ended.

Christine Quinn ( former speaker of the NYC council ) strong armed the city council to overturn term limits, ( that the public voted for ) which allowed Bloomberg to buy his way ( by spending over 100 million dollars ) to a 3rd term as mayor. When DeBlasio took over after the Bloomberg / Quinn dynasty (after candidate Quinn was repaid by the voters with a paltry 15% in the primaries), he was left with a dead police contract leftover by Bloomberg. The unions which could have went to NY State arbitration waited for DeBlasio to take over to see if he ( as a man of the working people – allegedly ) would come to the table with a fair deal. He basically snubbed them by offering them virtually nothing by the way of raises and plenty by the way of concessions. The unions then had no choice but to go to the state to arbitrate which they could have done earlier if they didn’t wait for DeBlasio to officially shaft them. Little did they know that would be one in a series of missteps where the mayor would be thumbing his nose at the police . Here are some of the main highlights ( or lowlights ) as to why the police have a serious problem with the mayor ( aside from the couple already spoken of above ) :

So as you can see it is a hot mess. The majority of it within control of the mayor who now has dug himself a huge hole and has been backpedaling his way through the two recent funerals with half hearted eulogies and a brow beaten police commissioner who is a shell of the man he was during his first tenure 20 years ago with the NYPD. Where things go from here is largely in the mayors lap as he tries to gain respect from 35,000 police officers he hasn’t shown an ounce of respect for since before taking office. Good luck and get your popcorn ready.

Let’s just hope more cops don’t get assassinated in order for him to really give a crap.