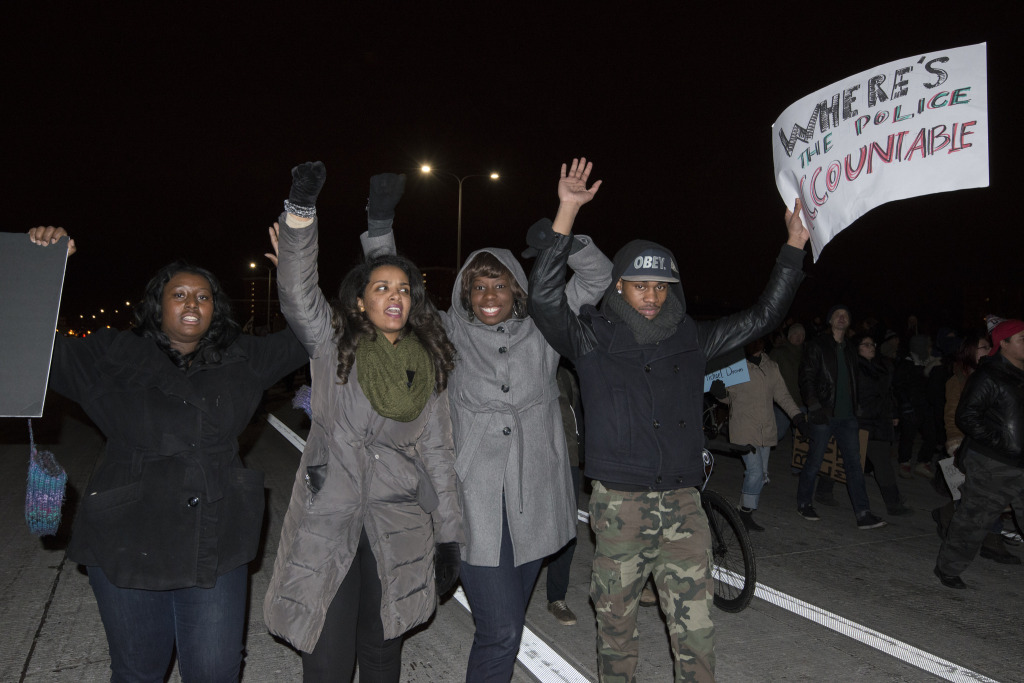 We hold police to a higher standard of behavior because they are police and are trained and our tax dollars pay their salaries. We all expect to be treated professionally and respectfully by the police regardless of our race, sex, ethnicity, religion, social status, gender identity or sexual orientation. After all, if we can’t rely on the police to exhibit the standards of moral fortitude then who can we rely on, right? Oh, that’s right we can also count on ourselves. Just because the police get paid to act professionally and respectfully, it doesn’t exclude the rest of society from practicing similar morals and values. Some people have had some thoughts and referenced others on accountability:

In his "apology" to Michael Brown's family Darren Wilson said he was sorry that Mike Brown "lost his life." No accountability. Zero remorse.

#Ferguson should remind us of nationwide barriers to accountability for US police abuse: @HRW. http://t.co/5mgaxiPJav pic.twitter.com/SvxXH9vx20

We have an obligation to act and teach younger people how to act in a thoughtful, responsible and courteous manner. That means accepting other citizens regardless of their differences even if you don’t agree with their religion, or race, or sexual orientation, or gender identity. That also means abiding by laws, acting responsibly, and respecting authority. We cannot go back and change the wrongs of our collective socialization which have brought us to the point where we are today, but we can try to modify our society into one that shows a major correction in thought and action. Racism, sexism, homophobia, transphobia, anti (insert religion here), is wrong yet many still practice that antisocial, oppressive behavior. When someone unintentionally or intentionally violates the law, the police are there to enforce the laws for a reason. We are obligated to comply with the lawful orders or directions given to us by them whether we like it or not. The police are accountable for every – single – thing they do as well because if they are violating their own code of conduct or regulations then they negate the very reason they exist.

What is disturbing to me is the simple fact that Michael Brown was in a physical confrontation with Officer Wilson period. When I was growing up, my parents (who were born and raised in Bushwick, Brooklyn) taught my sister and I that if the police stop you (on foot or in a vehicle), for any reason, you are to give them whatever information they want and be respectful to them. Do NOT talk back to them and do NOT even THINK of putting your hands on them. This simple code of conduct seems to be lost among a number of people in our society, particularly younger people. Right, wrong, or in between, no one should be putting their hands on an officer who is acting in their official capacity, especially if they are attempting to take some sort of enforcement action. Period. You can disagree with them, you can protest against them, you can say whatever you want verbally but be ready to be held accountable for that and certainly held accountable the second you DECIDE to put your hands on them and take physical action. A person who decides to not comply, and worse, engage in a physical confrontation with the police as they are acting in an official capacity are leaving the officer with few options on how to handle that scenario.

If the police act in an unprofessional or illegal matter there are a number of ways to report that behavior and activity, which today will be investigated on a local, state, or possibly federal level. There is also a civil litigation that could be brought forth against that officer as well. The general social contract between citizens within the United States dictates that the people elect a government which will in turn provide protection for the people by the way of a military and local and state police departments. Thus people go about their daily activities knowing that the police are out there protecting and serving us – the citizen. If we make a decision to step outside the boundaries and commit a violation or outright break the laws of the local municipality, state, or on a federal level, the police (or other agencies) now have the right to investigate that and (summons, or) arrest us based on the WRONG we have committed. In Ferguson, MO, there have been reports that Officer Wilson stopped and engaged Michael Brown and his friend at first (unknowing of the robbery Michael Brown had just committed prior to their engagement) for some minor infraction (of jaywalking). Even if the officer was acting disrespectfully (which I would not agree with), Michael Brown should have complied with him. He could have filed a complaint with a police supervisor, or local district attorney, or state attorney general if necessary if he felt his rights were violated in any way. Assaulting a police officer is not only illegal, but it  potentially leads to a number of different variables, all of which are not going to bode well for the citizen taking that option. Again it’s a choice people make, but clearly not the right one. White people do it the same way black or other people do it, of course you will usually only hear about the incidents where there is a racial differentiation because then it can be made into a racial incident, whether it was or not, by the some media and by some who race bait for their own personal gain.

No one wants to see a young person (or anyone) get shot by police and die in the street, but everything that happened in Ferguson, MO in August 9th, 2014 unfolded in a way which led to that encounter turning deadly through a series of choices that both parties made. The grand jury in that case came to a conclusion based on the evidence and facts available that Officer Wilson should not be indicted for the justifiable actions he took. What has transpired since then is a perfect example of personal accountability gone wrong as it has only been detrimental to the city of Ferguson, MO,  it’s own citizens, and business owners. While it’s not an easy pill to swallow, the fact is that everyone has to be accountable for their role in an encounter with the police and not just the officers.

3 thoughts on “Are Only The Police Accountable?”