In the United States, police officers are armed. I was one of them. With incidents such as the one in Ferguson, MO in August of 2014,  there have been all kinds of keyboard quarterbacks (the majority of which have no police experience) giving their insight into this incident, among others, about whether they are right, wrong, or indifferent. As a recently retired detective with nearly 22 years of service in the NYPD and a deep background in its training as a police academy instructor – and in the last decade, a citywide community affairs liaison – I wanted add my voice to the mix. My hope is that people will take away something from this post (and others) and add it to their factual information and possibly reformulate their own opinions. The shooting in Ferguson has raised a lot of different questions regarding police training, the use of firearms, racism, accountability, and the general state of affairs between police and community. This post focuses on the use of force and training in the use of firearms by police (specifically NYPD trains as an example). Future posts on this blog will cover other related topics.

So let’s talk about a few things about police and police training, especially when it comes to firearms. First, all police in the United States are trained in the use, handling, securing, and maintenance of firearms including the litany of laws which empower them to have or use said weapons. People who engage in criminal activity and/or fight with the police, at that moment, are not following the law. Some have raised the question as to whether or not police can shoot an unarmed person, such as this blogger:

In one of the Supreme Court cases Mr. King cites (Tennessee vs. Garner – 1985), part of the decision reads; “Where the officer has probable cause to believe that the suspect poses a threat of serious physical harm, either to the officer or to others, it is not constitutionally unreasonable to prevent escape by using deadly force.”  In Ferguson, Michael Brown allegedly (with marijuana in his system, according to the autopsy report) verbally challenged Officer Wilson (who was of a lesser physical presence), and refused to comply with the officers commands. He then physically assaulted Officer Wilson as well as trying to wrestle the officers gun away from him, placing the officer in an obvious state of fear of his safety. In that instance the officer is justified in using whatever force is necessary to end that threat. So while shooting someone who is technically unarmed might seem like excessive force, the particulars of this incident seem to indicate that the officer being attacked and being put in imminent fear of his life and caused him to feel the need to revert to using deadly physical force. That was a decision made within a matter of seconds during their struggle. It is not a decision police officers want to have to make but the safety of the officer is paramount at that time. Had Michael Brown been able to wrestle the gun away from the officer there is a good probability the officer would have been shot and possibly killed and then the perpetrator now has an almost loaded weapon to do who knows what next? That is not a scenario police officers or anyone else wants to see. No one wants to see a young person get shot by police and die in the street either, but everything unfolded that day in a way which led to that deadly encounter through a series of choices that all parties made. Everyone has to be accountable for their role (which is something to be discussed in a followup post).

There is a general “force continuum” that police are trained in across the United States. The force continuum starts as  low as the police using their physical presence to deter unlawful behavior. If their physical presence isn’t enough to deter someone then they could take it up a notch to using a common right of inquiry or vocal commands. If vocal commands are not complied with and the police are now in the process of trying to take enforcement action and arrest someone then actual physical interaction/force would be necessary. If someone does not comply with physical force this will certainly kick things up a notch and send off alarm bells for the officer(s) involved. They then have to resort to different defensive tools at their disposal. These could start with mace or pepper spray (some departments have tasers as well), to finally resorting to using a firearm. All throughout the majority of “force continuum” officers will likely be giving vocal commands in which people are obliged to follow, especially if they are being placed under arrest. 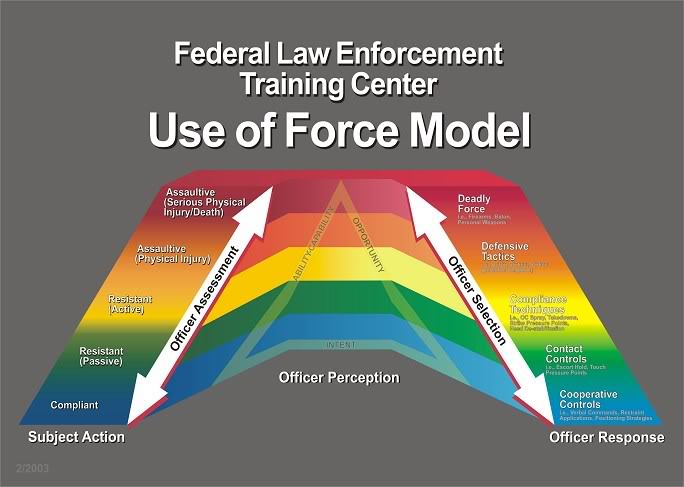 When police use their firearms they are trained to shoot to STOP, not shoot to kill. I have heard many bring up an interesting question such as this one about where the police should shoot someone:

If you can't shoot this guy in the leg you shouldn't be a cop http://t.co/TH28pw2iVH

Police are trained to shoot “center mass” which is the torso portion of someones body. Why? Because that is the largest area of a person where the officer may be able to hit (as opposed to a hand or a trigger finger). It is also the part of the body that is most effective to STOP the threat of the person attacking the officer whether it be physically or with an actual weapon. Trying to hit a person at distance in any particular area is extremely difficult – it is NOT like in the movies. Most officers will go through a 20, 30, 40 year police career pulling out their firearm but ironically few will actually have to use it. When a police officer uses a firearm that means an extraordinary set of circumstances has occurred where the officer is in imminent fear of their personal safety or the safety of another and there is an immediate sense of using the weapon to thwart that threat. Having said that, officers in some cases may use a higher level of force even if the perpetrator is not armed with an actual weapon but is overpowering, or using brute physical force against the officer which seems to be the summation of the situation in Ferguson. The grand jury in Ferguson  is likely wrestling with that now and we will soon know the results of all the facts and evidence which will help form their decision.

How everyone reacts to the decision in Ferguson will be fodder for another discussion. In regards to police using deadly physical force, take it from someone who did not pull the trigger in nearly 22 years, but could have on a few occasions, Using deadly physical force is not glamorous or something police take lightly. It is a life changing decision, usually made within a few split seconds in the midst of sudden chaos in which training and self preservation dictate how or when it may or may not happen more than any other factors. Recently, I was asked by BBC Radio Worldwide (World Have Your Say program) to join a conversation with police officers from around the world about what it’s like to be an armed police officer. In any police involved shooting, I think it’s reasonable to support the officer, based on the assumption that the officer acted within the law and was in the confines of their training and regulations. If the facts prove otherwise, then I would understand people changing their opinions.